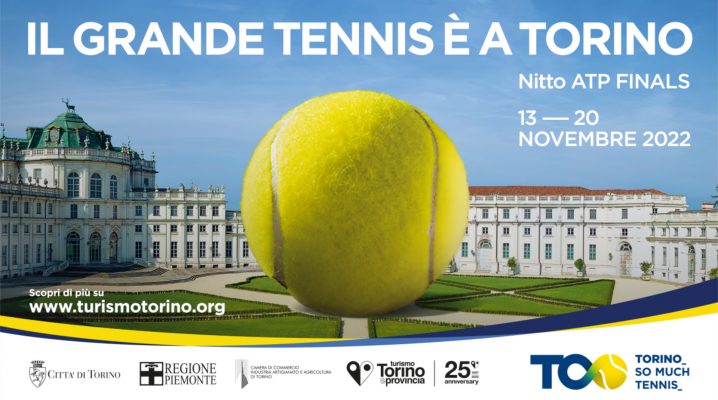 Turin and Piedmont are ready to host the second edition of the Nitto ATP Finals, which will be held at the Pala Alpitour, the largest indoor sports arena in Italy, from Nov. 13-20, organized by the FIT (Italian Tennis Federation) and the ATP (Association of Professional Tennis Players). It is one of the most important men’s tennis tournaments, with the eight best single players and eight best doubles pairs competing for the last title of the season each year. Turin is the 15th city to host the event, which was held in London from 2009 to 2020 and since last fall has landed in the Piedmontese capital to remain there until 2025.

Athletes, tennis fans, journalists, artists and tourists from all over the world will come to the city’s territory. The sports competition will therefore also be an opportunity to turn the spotlight on the food and wine and tourist-cultural excellences of Turin and the entire Piedmont region: from the rich heritage of art, history and culture to the highest quality gastronomy and wine tradition, passing through the extraordinary landscapes that give a great offer of outdoor, sports and activities for leisure and relaxation. To best receive all the incoming public City of Turin, Piedmont Region and Turin Chamber of Commerce, in collaboration with Turismo Torino e Provincia, Visit Piemonte and Fondazione per la Cultura Torino have worked together on a very rich program of free widespread events: talks, interviews, shows, tastings, musical events and much more.

Hosting the Nitto ATP Finals means for Turin to become the world capital of great tennis,” says Stefano Lo Russo, Mayor of the City of Turin. “This year the event gains strength thanks also to the collaboration between all the entities, tour operators and trade associations. An investment that we hope will allow our city to establish itself more and more at the international level. Major events, in fact, have a positive impact on the local economy and are an opportunity for the city and its residents. To involve citizens and visitors, we have therefore organized a rich program of cultural and entertainment events in which everyone can participate.

Great events such as the ATP Finals are one of the best ways not only to promote sports culture, remembering that this year Piedmont is the “European Region of Sport,” but also to enhance the excellence of an area rich in beauty, history, art and food and wine such as ours,” emphasizes Alberto Cirio, President of the Piedmont Region. We can only be happy, therefore, to welcome the athletes and the public to this second edition hosted in Turin, which will once again turn the international spotlight on Piedmont.

We take the opportunity offered by the presence in the city of the Nitto ATP Finals to set up a showcase of national and international appeal and present the excellence of our territory. In fact, our Maestri del Gusto (Masters of Taste) will parade at Palazzo Madama, along with Torino DOC wines and Torino Cheese cheeses in a rich schedule of guided tastings open to all, organized with the collaboration of the Piedmont Trade Associations and Chambers of Commerce,” explains Dario Gallina, president of the Turin Chamber of Commerce. “We will also talk about companies in the sports supply chain, nearly 4,000 locations in Piedmont, with more than 13,000 total employees, up 25 percent in the last 10 years. Specific talks are scheduled for them on topics such as doing business in the world of sports, contracting, sponsorships and services for export and digitalization. When three years ago we began the journey that led us to organize the Nitto ATP Finals in Turin, we tried to define an organizational model that would see the institutions as protagonists together with us, both at the national level, Government and Sport and Health, and above all at the local level, with the Municipality and the Region – says Angelo Binaghi, President FIT – Italian Tennis Federation -. It is a model that is proving to work well, here as in other Italian realities, and can serve as an example for other sports as well. It is even more so here in Turin, where we have found ideal partners to ensure that the Nitto ATP Finals are not only a successful event but also put down deep roots in the life of the city.