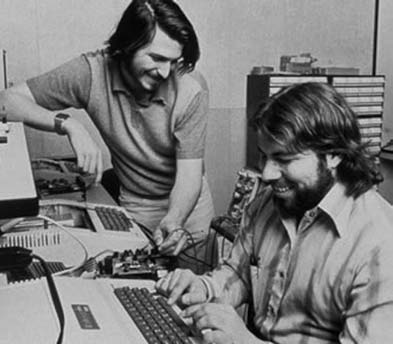 Listen all. A new frontier is opening among collectors, a frontier until recently unexplored. Let’s relegate to the attic all the old cabinets full of china, collections of little value and those from when you were a child. That’s all old-fashioned stuff. Junk. Now the coolest way to collect things and make money, it is called high-tech Vintage. Yes, exactly what you did not even dare to think about: to collect objects of the past that have shaped the history of modern communication.

Hard to believe? Then go and visit Bolaffi, in Turin, and ask to see for a few minutes a little object which is worth a good 390 thousand dollars. And it is just a computer. A pile of wires and transistors that has, more or less, the eleventh of the power of your Smart phone. But it is the first computer Apple have placed on the market. It is called Apple One and it was proposed to the first high-tech fanatics by the parent company of Iphone and Ipad; it was 1976 when Steve Jobs was not yet that Steve Jobs but just a young man who dreamed of a different world. Not many Apple One are circulating, only 200 pieces were produced from Cupertino. The price was 666,66 dollars. Now, besides what it represents – and everyone sees what he wants to see in it – the auction sale of this kind of object at such prices says a lot on how, very soon, high-tech vintage will turn. Because it was auctioned by no less than Christie’s and the buyer is one of the most important Italian collecting house, Bolaffi, in Turin that is.

It is very wrong to say that before this auction the phenomenon would not exist or some more nonsense. Around the world people have been collecting objects that have shaped the history of modern IT and communication for quite a long time.

Now, let’s stop and think about the progress made by cellular phones. From the “brick” in the 1980s to the size mignon in the middle of year 2000 (the first ones to fit into the pocket of your jacket without making you look like a lunatic or a ragged). And then let’s think about the history of high-tech in Italy. Did it ever cross your mind that Olivetti could produce cellular phones? One for all, the legendary OCT 300, the pocket breaker. Very long antennas and a crazy price: more or less one million and 600 thousand liras; it was launched on the market towards the end of the 1980s. Was it ugly? Not practical? Today’s parameters do not count. What is worth is that it has shaped the history of communication. Nowadays cellular phones range from 150 to 600 euro. Let’s not forget the legendary laptop computer by Olivetti, among the Italian productions. In those years, the Ivrea based company used to manufacture and to market the famous M24 in all its various versions, but in the meantime Olivetti was working on its laptops. One of these went almost unnoticed. Too small. Too weird. But revolutionary. It was called Quaderno and it was produced in 1992. It had the size of a notebook – odd? – and, among other things, it could record conversations. It did not think much – for that time – and maybe it could have been successful, but in a different period of time.

The Quaderno still remains a great piece in the history of the national high-tech. How much is it worth? As always among collectors, the price is set by the market and conditions of the piece are important. If you wish to count it among your period pieces, be ready to pay up to 500 euro. Not much? Well, who collects memorabilia is well aware of unsteady prices. In a year or two the value will be very different .

However, the issue of Vintage high-tech is so controversial that in a couple of years no one will ask what is the point in collecting old high-tech wrecks from another age. This because the world is fast realizing that preserving memories on how in a few decades the way we communicate has changed, it is fundamental to understand the future, to understand how far we have come to where we stand today. Try to think what impressed you most of the legendary Commodore 64 or the Silclair ZX 80: these are pieces that left the mark in information technology. Do you remember the Amstrad CPC 464 equipped with a four-fingers thick keyboard and colored keys? And the Atari 800, that kind of cash register today unbearable to look at as we are accustomed to more cleaner lines and softer shapes after the year 2000? Imagine, its third version had 64k of memory. It seemed endless. Today the chips from your cellular phone have this capacity. In the secondhand marketplace it is worth between 29 and 250 dollars.

Who would have thought we would have real-time communication, tablets and books that you can read on piece of plastic half the size of a pinkie. In the States all this has been realized a few years a-head compared to the Old Continent. Computer museums have been opened, the most famous one is in Boston in which there are displayed the grandfathers of our computers, these machines we use to write, to keep archives, to store thousand of pictures, songs, movies and to open the doors to the virtual world. And with which I wrote this article.

about the author: Lodovico Poletto