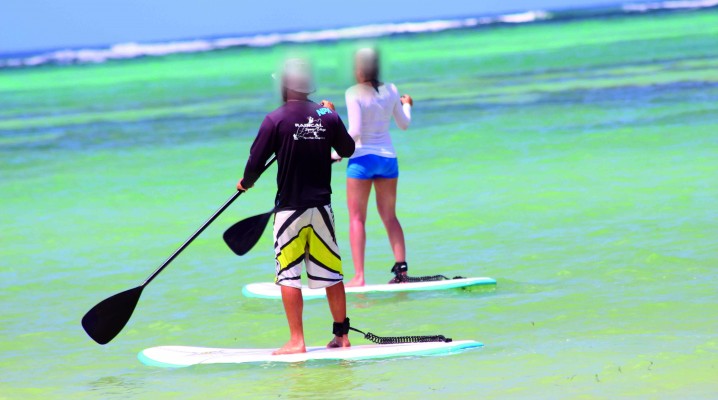 STAND UP PADDLING ? Cut and thrust, odds and talk among friends.
by Andrea Scarpetta

Between one personal trainer session and another, two friends and colleagues, Luca Cassolo and Andrea Scarpetta, have a little chat on SUP.

Andrea is curious and wants to know everything about this sport and starts questioning Luca about it. “For the past couple of years I have been seeing on the river people paddling while standing on some sort of surfboard. What is this new sport about?” asks Andrea.

SUP means Stand Up Paddling. This is how Hawaiians used to ride the boards they used to go around, just like a kind of western bike.

It is, therefore, an old sport that is renewed today by technology.

“Where do you practice it and where is it usually practiced?”

Since January 2013you can practice SUP also in Turin at the Eridano Club, beautiful location on the river PO.

A group of sport enthusiasts, a ten person competitive team and about fifteen amateurs have already come together to follow this sport.

You can practice it on any stretch of water, both on flat than on wild water, or in Moncalieri to train on rapids or on other rivers; in 2010 I organized, together with other bold people who practice SUP, we came down the river Dora Riparia paddling.

SUP is very popular on any kind of water basins, rivers, lakes and seas.

In the USA and in Oceania this sport is very popular; in Europe, France is the country that is setting as example for what concerns the organization and practice of Sup. Of course Italy is still behind.

The majority of Italians like indoor sports, especially the combination couch-soccer game.

In Italy there are already great athletes that excel at international level.

The brands give us some help to propagating and promoting this sport and, furthermore, the Turin female paddling team is improving.

“What are the benefits of paddling?”

First of all it is fun, you use a lot of muscle groups, especially those that are really important for women.

It works on abdominals, buttocks, legs, it strengths arms, shoulders while slimming and shaping.

Then the constant research of balance is good for blood circulation and lymphatic drainage of lower limbs.

“Are there any races and events planned”

Yes, in Italy there are already some races planned: “on wave” just like surfing, and a track called “race” that consists in a course marked by some buoys practiced in any weather conditions the day offers, calm water or rough sea

The “riversup”, practiced on rivers with rapids, is propagating.

“What kind of training is needed to practice Sup?”

The training program for the competitive team varies a lot: it is very demanding but it is also a lot of fun because very different each time.

The specific training is a mix of canoeing and rowing. The training involves many exercises for the balance, specific or on the ground. We use different types of balance boards and the competitive team train with these tool. We do a great functional training with weights, kettlebels, trx, med ball and many other tools.

As far as aerobic exercises, besides specific training on SUP, we use the treadmill and for those who do not like running, there is the fitwalking, a very efficient walking technique that stimulates the cardiovascular system just like running but it is less traumatic on joints.

Furthermore, because this sport put a lot of stress on the foot, during training, both on the ground and in the water, we wear fiveFinger shoes that allow a natural training on the balance board.

“Any other strange things about SUP?”

While surfing requires a less large board to dominate the waves, SUP requires paddling while standing on the board. Although it may seem complicated, I assure you that is accessible to everyone.

SUP is really popular on California beaches; Hollywood stars, who hang out in those beaches, were the first ones to practice it and to spread the sup-mania. Crawford is just one of the beauties to be spotted while shaping her body paddling on water.

Other actresses have chosen sup to stay in shape:

“How did you develop this passion for this sport?”

I am a professional personal trainer and a coach and I also have a long experience as an athlete myself, from kayak to running and triathlon and so on. This passion about sports has made me curios about new experiences; in 2009 my passion and expertise about water sports has led me to discover and try, thanks to an Hawaiian friend, SUP.

From there I then introduced this sport also in my hometown, Turin.

Paddling is an exciting way to experience the sea and water in general, it is another way of walking, to exercise while standing up.

Meanwhile, the two friends give a glance at the clock, it is time to get back to work; they are both working to involve in their passions those who wants to approach a healthy lifestyle, exercising and sports.

about the author: Andrea Scarpetta