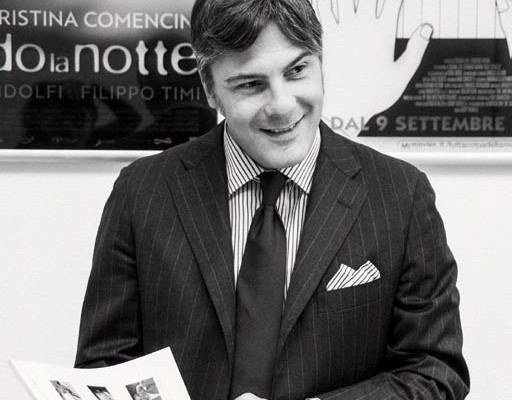 Paolo Tenna – Cinema what a passion
by Patrizia Caridi

1)Who, what, where (Who is Paolo Tenna, what did he do, what are his ambitions and hi goals)

2)In 2005, together with Simona Izzo and Ricky Tognazzi, you founded TOP TIME and you cooperate with film production through product placements.

Is this inexpensive way of making movies a winning solution as far as visibility, compared to half the costs for traditional advertising?

3) The film industry of our region has reached international levels, how fundamental was the Film Commission support, often financing expensive productions, to increase the attractiveness to both small and big screen?

4) Are there any other methods of intervention to prevent the movie industry paralysis?

5)Are there any future projects in which FIP is willing to invest?

1-2)My love for movies started when I was a child; a friend of mine and I used to try everything to be able to watch as much movies as possible on a row, after stealing his mom’s “special” movie card that allowed to watch unlimited films for two people. On a winter weekend I think we watched 7 films. I then worked in communication while maintaining the interest for the seventh art and then in 2004, with the introduction of the Urbani decree on product placement, I asked Ricky Tognazzi and Simona Izzo, with who the year before I started a “traditional” advertising agency, to start working on it so that I could fill in my gaps in movie production through the experience I would have acquired on movie sets I was about to direct; in return I would have brought my experience in marketing. Since that day, I have worked on over 30 film projects involving hundreds of brands.

3)The Piedmont Turin Film Commission was the first one in Italy to be established and it is well recognized for its ability to better manage the productions that come here in Piedmont to shoot. The possibility to work with local authorities, it allows to better handles all the logistics of a film production (permits, local managers, technical support) and to make accessible, both in terms of services and costs, some public locations that, in the other regions, would be difficult to access.

4-5)The External Tax Credit, for private companies outside the film industry, is definitely an interesting tool; It allows to compensate for the progressive cuts in public funding, giving private investors the possibility to finance new film projects safeguarding their own investment and capitalizing on movie communication and promotion.

The Film Commissions can therefore refers to FIP for large productions; FIP will act as capital collector for future investments: it will contact the major business realities in Piedmont making them aware of the financial and fiscal benefits the “External Tax Credit” could bring once it will be in force and subsequently extended.

The Piedmont increased financial availability – resulting from the sum of public and private capitals – will attract high-profile film productions with significant production budgets: this kind of projects (for example, the positive investment FIP has done for the latest film of Claduio Bisio, Benvenuto Presidente, whose commercial success has exceeded 8.5 million Euros at the box office) will guarantee financial returns expected both by FIP and by private investors, setting off a capital flow that will allow to reinvest in new or similar projects.

about the author: Patrizia Caridi