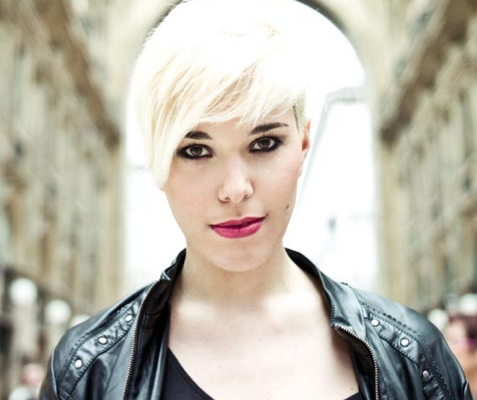 In times of crises it is daring to think of musical art as an investment: but it is something that must be done, it is precious and important. It is nice to think that this statement “in times of crises” could become the paradigm of the past. If the investment is made on a young talent, it is winning bet. We met Giulia Mazzoni after listening to her album for piano. Giulia does not sing, for sure, but she gives voice to her musical scale, to flats and sharps, to pauses and tempo which fulfill the musical space in a dimension difficult to find. That is the reason why it is fascinating if not unique. To get your hearing used to a new talent it is a great energy. Giulia is 24 years old and she is the winner of the Ciampi Price 2013, achieved for the category “Best cover of Piero Ciampi”. She received recognition arranging for piano the piece by the songwriter and poet from Livorno, called “Quando il giorno tornerà”: “I am really happy to receive this price which has been for years a synonymous of quality in music. Piero Ciampi has been an important artist for the Italian music scene and having won a prize named after him thanks to the arrangement of one of his piece, it is for me a big honor”, she said.

Her debut album, “Giocando con i bottoni” (Playing with buttons), has the taste of summer; a summer that saw her being the protagonist of performances and acknowledgments of the critics. In October she made her debut in one of the Italian and Milanese temple of music, the Blue Note, and next December she will perform at the Auditorio Parco della Musica in Rome, another milestone of quality music that leaves a mark. The album “Giocando con i bottoni” includes original pieces composed and performed entirely by Giulia, which portrait sensations, imagines and memories of her childhood and of her present. Moving inside modernity, with pop music, rock and traditional music influences and again with romantic and impressionist influences but at the same time minimalist, simplicity is the key element of the album.

Your story is like a fairy-tale. Tell us when did you discovered your passion for playing piano?

“It happened by chance. I discovered the sound of the piano when I was in primary school, coming from a classroom beside mine during playtime. That room became a secret spot where to spent all the seconds available, playing and opening my heart to what it later became my best friend. Putting my hands on the piano, I discovered the desire to communicate becoming interested in composing music”.

Definitely a creative and unique approach for your age.

“It is this creative approach that brought me to share with others my dialog with the instrument”.

What does it mean for you to write music.

“It means to express and tell what I feel inside me. Sometimes, because of my shyness, it is hard for me to express and tell my inside world. For me composing music is like a psychoanalytic session, because it is an exclusive space where I have the chance to look very much inside me and express myself. I can open up my heart to my piano just like I will do with a friend, and that’s not psychoanalysis”.

And what does the piano give you in return?

“Piano is like a mirror. Through music I discover deep sensations, unconscious inner worlds and memories and I go over them again just like I am travelling.

And when you are not playing?

“I am a 24 years old student and I see the world through my curious eyes. While living I take pictures of my emotions and sequences that I then express when I play the piano”.

What kind of music and books do you like?

“Right now on my night stand I have a collection of Garcìa Lorca poems and I listen to a lot of music. The latest Daft Punk album is beautiful and right now I am getting a little bit hooked, I listen a lot to David Bowie but I still love Chopin, especially the nocturnes. But I listen to any kind of music: from classical to electronic, from pop to rock. Among Italians artists I can give a few names: Jovanotti, Battiato, Elisa and Cremonini”.

“Giocando con i bottoni” is your first album. Which tracks did you leave out?

“In my professional life I wrote about a hundred of pieces, a lot of music. The selection I made for the first album was according to what I wanted to tell, concepts related to memory and simplicity. The album has a beautiful sound, an unusual recording and a very modern timbre”.

What do you except from your instrumental album?

“I think the beauty of music, especially the instrumental music, is to make you dream and travel”.

What does it means investment for you?

“It means to give the chance, especially in arts, to people to fulfill their own dreams. Music is not an asset. But we have to believe in a project and make it happens; profit will come later and do not take it for granted. I like the idea to invest not in a tangible product but in a dream, in something deeper and on the future”.