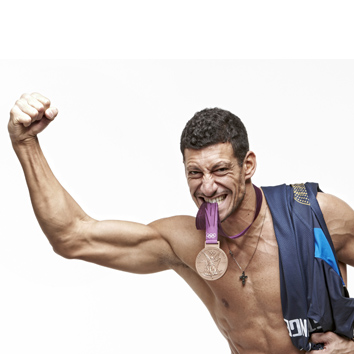 I know everything about his passion for music, especially for Soulful, because we have spent few nights behind a dj console; we have talked many times about races and cars, but what I did not know was his passion for dancing, which seemed to me more than a challenge for him (the “Mastro Tower” loves challenges); therefore I was really curious to know a little bit more about him participating to the tv show “Dancing with the stars” (a tv show aired on RaiUno and hosted by Milly Carlucci: stars from the show and sport business become dancers). The show must have been perfect for him as he used to train in the gym and to practise any kind of sports; so I finally ask him:

How did you get the idea of ​​moving from the floors of Sport Halls to the dance floor of the most glamorous television show? Because of your friendship with Paolo Belli? Paolo is a friend of mine and we did some charity events together but of course he is not in charge of casting for the show. I was contacted by the agency I work with and I immediately accepted because I liked the idea to put me to the test in a discipline, such as dancing, that has always intimidated me.

I know you are very meticulous and perfectionist, competitive and strong-willed and you worked really hard during the week for rehearsals. What was the difference between rehearsing  some choreographies for a prime time show and training in a gym before a match? They are completely different things. The only thing in common is my desire to do my best, trying and trying, as I always do. For an athlete is much easier getting ready for dancing than getting ready for a sport season; studying some choreographies is less “stressful” on your joints than regular training: I had fun and I relaxed!

What was it like to have a woman as head coach? (Sara di Vaira was his dance teacher and she said he was a “mountain” – editor’s note). And what kind of relationship you two had because, I suppose, she said to have a temper? I specifically requested Sara to be my coach. I knew she had a strong temper, just like mine, and confronting with her was a further challenge which, I think, worked out.

If I should ask Milly Carlucci one of your good and bad quality, what do you think she would say? My good quality is to be a fighter that never gives up. My bad quality is that I used to turn my back to the cameras.

Now you are very popular also among people not really interested in sports: how do you think they saw you during the show? I think that this is one of the best quality of this show: celebrities from different business, like sport, have the chance to become known by a different target of people. As far as I am concerned, who was not following volley had the chance to get to know me as I am in the everyday life and then, maybe, they got curious to watch some old games and they got to know me as a player. Judging from the affection I received, I am happy to have had such a great feedback.

Do you like social networks? Is it better Twitter or Facebook? I think nowadays social networks are really important. They are tools to communicate and to inform and they are accessible to everyone but they should not replace interpersonal relationships. Twitter is what I use more often, because it is faster and I have the impression that the people behind the profiles are more real. I receive a lot of messages on @gigi1mastro and, as far as possible, I try to reply to everyone and to retwitter the most beautiful ones.

You have been a very important player and very popular in volleyball. How do you explain this silence around you by insiders of this sport? Why volleyball seems to have forgotten Mastrangelo? I think that, unlike other sports, people in volleyball does not like to be exposed too much: it is a “small” world and it wants to stay “small”. After playing in the Olympics with the national team, all clubs tend to keep their athletes away from the spotlights of showbiz. It is a general attitude, it is not something that they are doing just with me. Many former athletes and champions have not been supported in looking for a new careers (as sport commentator, coach, ect). I don’t feel targeted.

Do you think that, beside the bad period of time you had in Cuneo after the Olympics, you will miss not playing anymore (especially in the national team) and that is time to find something else to do, maybe in showbiz? I think I can still do a lot in volleyball, but right now I could look for something new abroad, not here in Italy. For one thing, some important film maker suggested I could play some leading role. I will work on this and if I will be able to do it (he has now a knowing smile – editor’s note) why don’t try it?

In times of global uncertainty what would you wish for young people for their future, especially if they are interested in a career in sports? Let me say this first: I think sport as a hobby is really important and everybody should practice some sport. To those young people who want to pursue a career as a professional athletes, I suggest to check their physical qualities and attitudes. Sport, when it becomes a job, is hard and involves many sacrifices. I dreamed to become a policeman and even today, I have to admit it, it still fascinates me: also my dad was happy about it. But then, my height and my physical qualities were crucial in choosing what to do in my life.

about the author: Marco Longhini