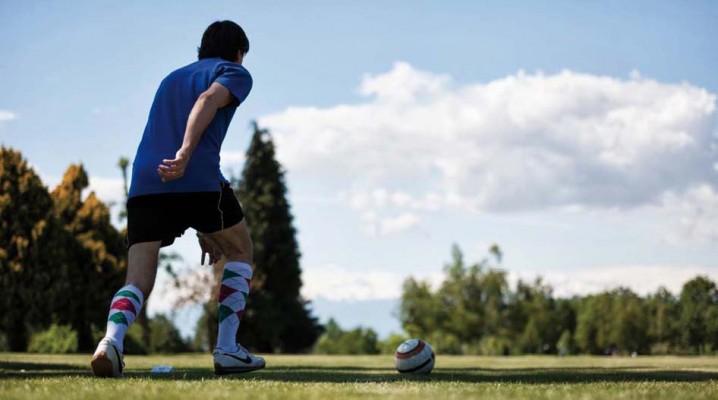 Footgolf: football in the hole
by Pietro Diana

A new life for golf. Or better to say, a parallel life. A new life to kick, to develop just out of curiosity, or just as an alternative along with the traditional activities carried out on the green among holes and clubs. This is called Footgolf. Grown out of passion for football, it mixes with a sport different in nature and origins. Fairly new, created only in 2009, it is becoming a widespread phenomenon all other the world, especially outside our own country where it is still in its infancy. It is very simple: five-a-side football shoes instead of the traditional golf shoes, socks, knee-pants and the ball used by the player is the same with the official football of size 5. No use for clubs and golf balls this time. The caddy also can take the day off. Everything else stays the same, as we are playing at the old good golf: a series of holes (a little bit wider compared to the normal size, otherwise it will be difficult) using the fewest number of strokes to complete the course scoring points. Insane? No, quite the contrary. And it does not come from the overwhelming italic passion for football, either played or watched. This is proven by the fact that it was invented by the Dutch and precisely Northern Europe was the cradle of this discipline. But it did not take long to become known in our country: a league was created and few months ago the first edition of the Italian Open was held in the frame of the golf club I Girasoli, in Carmagnola, a few kilometers away from Turin. Most of the credit goes to the president of the Footgolf Italian Association, the Tuscan Leonardo Decaria who has a “bad” passion for soccer, and to all his staff. “88 people enrolled in the competition, among them 30 were foreigners, representing six nations. By now the international federation has members from four continents: from Australia to Argentina, from Panama to Canada, from many European countries and, recently, even from South Africa. Officially, the nations involved are nearly 18”.

But the true challenge it is rather to find already existing facilities and spaces suitable for this sport that, initially, could give the impression to be something similar to vandals passing through a china shop. Nothing could be further from the true. As an old ad used to say: try to believe. “The hardest thing – says Decaria – is to try to convince the golf club owners to host us. Once stereotypes are overcome, it turns out that footgolf does not damage any facilities because it is not played on the green but on the fairway, where the level of the grass is higher and where new sods are placed more frequently; because the holes on the course, once used, can be re-covered with some soil without leaving any traces. The length of a round of footgolf is at least half the length of a round of golf. It is not possible to cover a similar distance kicking a ball”. In Carmagnola they wanted give it a try: I Girasoli have now a new small course with dedicated holes just for footgolf, ready to coexist with the lovers of tradition. And another one maybe opened soon, always in Piedmont , in the Pinerolo area. Right now these are the only two facilities in Italy that have been infected so far, trusting to see the movement growing over time.

It is fun, there is no doubt about it. But it has all it takes to turn into a business for those who run golf clubs. First of all because the catchment area could be unlimited, involving those who do not even think of playing golf but love to kick soccer balls. As one thing leads to another, being a regular visitor of the golf club the new member could develop an interest for the traditional discipline, finding out that it is not just a sport for rich and snob. There are few stereotypes to overcome, from both sides. Let’s keep in mind that many famous soccer players have been playing golf in their free time for quite a long time. A bond just waiting to be strengthened once and for all. Outside the Italian borders, many have already sniffed out the bargain: in recent months the Netherlands have hosted a very important high attended tournament, supported by outstanding sponsors as Rolex, Maserati or Blackberry. In Italy the guys from Aifg (www.footgolf.it) are planning a couple of tournament-shows for the fall. In 2014 a real tour will start off to let all the country know about footgolf, to find new facilities to play in and to develop an unlimited potential.

about the author: Pietro Diana