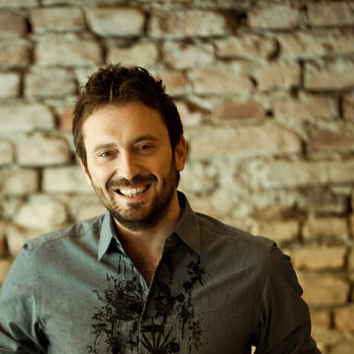 He is 34-years old and this year he will celebrate 15 years in the music charts. Cesare Cremonini has a great talent and when he was 18-years old he had to grow up a lot faster than the other kids the same age. He was brought up well, and this made the difference: he collects a lot of successes, he deserves his popularity and he is a rare profound person.

During the presentation of his latest album, “Logico”, he talked about himself with such energy and talent but  without playing the piano, smiling at the idea that “the album Logico had fantastic reviews and 50 liking stars before its release”.

Two years after the release of “La teoria dei colori”, What does this new album represent for you?

“Logico reflects my age. I laid myself bare. I leave many doors open, I look deep into myself and I confront my fears of changing who I am, that are typical of my age”.

Logico is really different from your previous work…

“As far as I am concerned, every new album is an allergic reaction to the previous one.  I have to be the first one to believe that a new album has to be discovered little by little. In an age where we are used to communicate in 140 words, the album is an invitation to come and see me at home. It is the discovery of something, not the discovery of something similar. You could run the risk of making a bad copy of something you have already done. Logico has a good drive and it contains different music styles, just like in any international situations where there are no music barriers. This album has more questions than answers and it really represents what I am and what I feel”.

If you had to define it?

“I made a lot of researches for this album, all sounds come from a preset. I have always worked with enthusiasm and this album is very free. I want and I need this album to be listened to from the beginning to the end, I want this to be a complete work, and honest and complete work. This album wants to be understood and listened to. I have never really liked those who, from the first listening, appreciated and judged my album … “Logico” has received 50 liking stars before its release, this means that there are people who judged the album before even listening to it. I’ve never been a fan of those who, after listening to half the album, acclaim me and my work. I like to repeat that “Logico” is a record that needs time”.

Have you changed your approach to your songs?

“I have always said that to write songs you have to close your eyes… In this album it is like my eyes are half opened because I want to catch the glimpse of the lights and I want to feel the floor”.

“I love to be ironic, and I wish the idea of a songwriter to be serious at all costs would change. When there is talent, whatever it is, he teaches us something”.

On the cover, mathematical formulas

“The cover is minimalist. The symbols on the cover do not represent mathematic but they represent the logics of life. Logos is the search for a more intimate rationality, it  is thought… A musician is pure logic when he studies a music score and he does not reject the logic of math and the logic of emotions. Logical is the word I have been hearing from my father to his patients since I was a child”.

How do you invest in music?

“In music I always aim for the top. The songs that I write reflect my life: it is inevitable. I wish sometimes to be less  vagabond but I have to admit that my lifestyle is what allows me to write better songs. I don’t want you to think I am a bastard, but the love story that does not inspire me a lot, it is a love story that is meant to be short”.

What kind of responsibilities do you have when writing a song?

“I have the responsibilities to communicate something. I respect the value and the duty to communicate. If we stop talking, we lose the taste of things to come and the curiosity about people. I’ve always surfed on the waves of life light-heartened. For every new project I feel as excited as during the launch of the first rocket to the moon. I have the great privilege of doing the job that I love and that is my passion. I want to live today’s life for better or for worse. I live life at its fullest  and I shared a lot of emotions with people. Feelings make the difference today, human sensibility is the true level. It took me fifteen years to go back where I was: I am happy, my career can grow free and I can express myself as I like, but I am still a boy who always needs to learn”.

How do you feel about this economic crisis we have been going through for some time now?

“I am positive about it, always. Italy is home of great talents that need some kind of recognition right now”.

You will be soon on the road with the Logico tour. Tell us something about.

“The tour will start next October and it will be a blast, the most important tour of my life! In past years I have struggled to express myself at my best with a tour, and I had to leave out some regions. Freddy Mercury is my idol therefore the stage is my ideal dimension. It will be the concert of an artist who has lived a very long interior journey; I still do not have a set list ready but I have so many songs to choose from. I never put my career in the hands of my fans. I rather make my own choices rather than accept somebody else’s choices. It will be a great tour, on stage I always give 470%. ”

When will you be in Turin?

“I will play at Palaolimpico in Turin next November 22nd”.