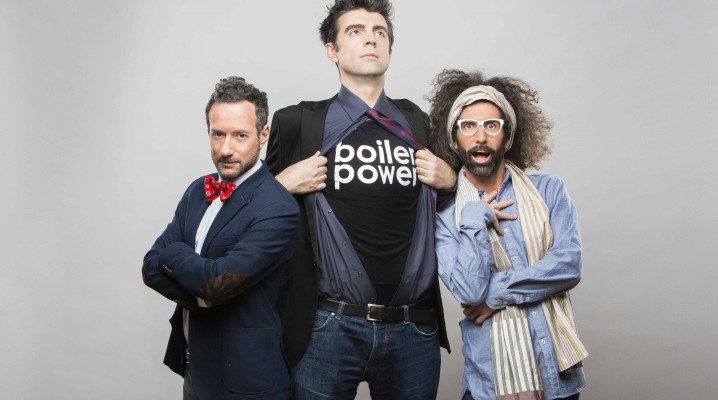 Being face-to-face with humor is always challenging and, needless to say, more than fanny. When humor triples in a single interview, the experience feels amplified just like an oceanic aerosol both for your mood and body. Laughing is good for you! Davide Paniate – host of Zelig1 – Federico Basso – comedian and writer of the tv show – Davide Cinelli – “Il Cafone” and “Teddy Maloscia” just to mention two of his most popular parodies – are known to the public as “the Boiler”. “The Boiler” drive the public crazy playing the part of some improbable journalists. For those who, as a job, goes to press conferences every day, it is really too hard to understand the edge between the real world and the teasing they play on stage… Because, let’s say it, it is likely that the winning idea of the hilarious soliloquies on journalists, comes exactly from situations like this one. In the motto “Boiler Power” there is the commitment of three stand up comedians whose personalities are versatile and complementary; their differences in personalities are their own strength, their better investment. You could find them on social networks as “Boiler Comedy Project”: everyday, conscientiously, their share laughter with pit stop videos and jokes, postcard size. Interviewing some of the most important national-popular journalists has been of the most fanny and interesting experience, certainly a good reference for my cv.

What does investment mean for each of you, in show business?

Davide: “ As in any other company, we put time, energies in it and we totally commit to our company. We invest in works strictly related to our and in projects that will bring some benefits only in the future but in which we truly believe”.

Federico: “It means to use our artist resources on stage every night, offering to the investors in the audience or in the living room a very favorable contract: a few hours of their attention in exchange for laughter and fun. Minimal risk for the public and enormous profits for our artist growth”.

Gianni: ” Investment for us means choosing an idea that we believe in: we work as craftsmen either on a sketch, a character or a screenplay as much as to turn it in a salable object. Time is the investment. And then if this work could be sold for a performance or a tv show, the investments has borne fruits”

In comedy, what is a good or bad investment?

Davide: “It is a bad investment when you try to follow the audience demand and you do not do what you know best. Try to improve while remaining faithful to our line and our artist chord is the best investment ever”.

Federico: “The comedy is one of the few areas where you can do bad investments. If it should happen, the bad experience could turn into an idea for a new gag in which to invest and regain lost profits.”

Gianni: “Sometimes you bet on project that, for different reasons, is not successful: for example, some pilot episodes which are left in some drawers and they are not produced. But who can tell whether the time you have spent in a project will not produce any profit anyways? On the contrary, if a producer decides to sponsor the project, the investment has been right from the financial point of view.”

When and why did you decide to put a trio together?

Davide: We choose each other without even realizing it. “that’s how we formed “the Boiler”, spontaneously, after years of sharing the stage in various labs, shows and more. An union created by the enthusiasm of doing things together.”

Federico: “We decided few years ago, creating a fusion of three distinct entities, no need for contracts or release clauses”.

Gianni: “Roughly four years ago, almost naturally, our paths have merged… As in the Bible: so was written”.

What is the difference between investing on themselves and on the other two members of the Group?

Davide: “We think as a trio. As 33% shareholders. You think about the good of the trio not to your own good; you take different steps from what you would have taken as a single artist, but you accept it and you leave your ego outside”.

Gianni: “When you invest on others, you have more responsibilities. It’s like having borrowed a friend’s car. But you have more courage, confidence and more satisfaction”.

Davide, Federico, Gianni: a word to describe each of you and the role within the group.

Davide: “Frederick is brilliant and he is mind of the trio. Gianni has talent and he is our factotum on stage. I am in the middle, I bring enthusiasm”.

If you were journalists from Investo Magazine, how would you introduce it?

Davide: “I know for sure who would not introduce it: Teddy Malosha from Cioè because he would get lost in colorful transgression; Chantal Gualtieri from Ego because he would speak only about himself. I am Davide Paniate from Investo Magazine, and I will talk to you about the importance to invest to obtain some results… follow us”.

Federico: “Investo Magazine: the green apostrophe between the words “I make money””.

Gianni: “Investo Magazine: the review from our point of view”.